Summary
Armadas have been out for a while yet the understanding behind them is still limited. Bigger armadas equal bigger rewards, lets talk about how to get there.

In STFC armadas are fights that up to 7 members of your alliance can join and fight these massive targets,  At current there are two types Normal Armadas and Borg Armadas.

Up to 7 what controls that?:

The armada control center building is responsible for how many people who can join your armadas and how much of damage bonus is applied. The higher level the building the more people who can join. You need to build the Armada Control Center before you are able to start armadas but you do not need it to be able to join armadas launched by other players.

There are currently 3 types of "Normal" Armadas in the game, Uncommon, Rare and Epic. I use the term "Normal" because during a recent event there were Borg Armadas which while followed Armada mechanics were different in tactics which is covered in the Borg Armada Guide. There are exchange Armadas that use a new ship called the Stella for maximum rewards which will also be covered in a separate guide. Armada targets cannot be attacked like normal hostiles they must be defeated using an Armada. Launching an Armada requires Armada Directives that correspond to their rarity and not the ability to find them in systems. In fact many times it's easier to find Rare and Epic Armadas over Uncommon.

Like hostiles each faction has armadas in their respective space and neutral armadas exist in neutral systems. Each type has its own strength and weakness.

When looking at the logs of an armada it may look like your officers abilities are not triggering. This is a known display bug, only the first (Most powerful) officer will trigger when displayed in the logs. If everyone in the armada has spock only the first will show but all the officers are indeed working.

A good idea of power needs for an armada is much like an empty station ~= 50% of its power. So for a 5 million power armada your total power should be around 2.5 million. Crew setups are very important at determining the outcome of armadas, as your crews improve you can push that ratio down.

As mentioned earlier having the right crew on your ship during an armada can mean the difference between an easy win and certain defeat. Even one ship with the wrong crew can have a big impact on the results. (Upcoming Blog post about this). Scopley disabled several officers and ship abilities which means they will not work vs an armada target and should never be on your bridge.

"Due to their size and power, Armada Targets are not affected by the following research bonuses and abilities:" 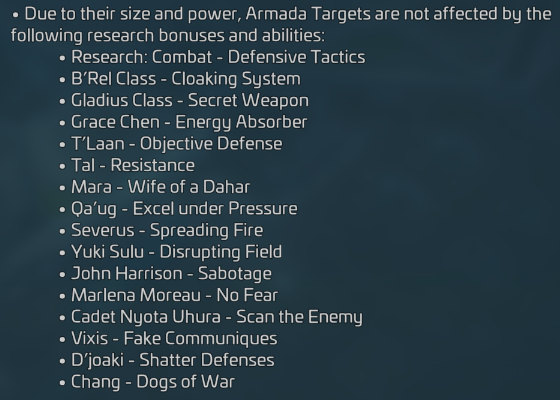 In several other articles we touched on the versatility of the Morale crew, in armadas it does not disappoint. Armadas are generally very long fights in number of rounds as such having the shield regeneration of Spock to absorb more damage is a big bonus as it extends the number of rounds and how long you absorb damage and dish it out. The Kirk and Spock combo leverages the hidden ability of Morale to increase penetration with the shield regeneration of Spock to increase the damage that is applied to the Armada Target while reducing damage to the hull of your ship by keeping the shields up longer. For the basic setup I will give provide 2 crews and these setups are ship agnostic, we will get into more complicated and ship specific setups later.

This crew setup is truly the basic setup in which can be used on any ship, the good thing about that is no matter what you can push yourself into higher armadas with a 1 size fits all setup... To elevate into the next tier we will move into the Intermediate setup but not before we talk about the other 2 hidden abilities.

Hull Breach applies to armadas like it does to normal combat but unlike normal combat everyone in the armada bennifits from its hidden ability. This means that while the armada target has a Hull Breach every ship that delivers a critical hit does increased damage! Paired with a Khan crew you can see massive damage in these long fights!

Burnings hidden ability is also one of the abilities that applies to armada targets every round the target is burning its hull is reduced by 1%. Keep in mind this effect can only happen once so having multiple burning pilots does not stack. However every pilot who has a crew that benefits from a single burn.